The Gold Medal for Innovation in Daffodil Breeding 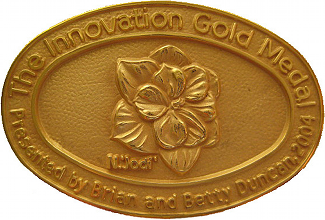 The Gold Medal for “Innovation” in daffodil breeding was presented by Brian and Betty Duncan of Northern Ireland to the American Daffodil Society on the occasion of the 50th Anniversary Convention in Washington D.C. April 2004.

The Innovation Gold Medal is to be awarded for the most innovative new daffodil exhibited at the American Daffodil Society’s National Show. The winning variety should demonstrate significant novelty, advance or break-through qualities which could be expected to influence future development of the genus for commercial or exhibition purposes.

The Innovation Gold Medal will be available for award at the annual National Show at the discretion and unanimous vote of the President’s selected panel of expert judges. Here is the criteria used to judge daffodils for the Innovation Award: Judging Criteria for Innovation Medal.

The Gold Medal will be awarded to the hybridizer and raiser (or, if deceased to the principal stockholder or exhibitor) of the winning daffodil provided it fulfills the following conditions:

This award was first offered in 2004 and the following daffodils (Narcissus) have received the Innovation Medal:

Join us in Dallas, TX on March 12-15, 2020 for our ADS National Convention! Refer to the 2020 National Daffodil Convention page for details.

Subscribe to our Newsletters to receive up to date information about our programs and events!